Have you ever seen the army strike a pose before in a frock or pencil skirt? Neither have I until I saw Kim Kardashian and baby sister, Kendall Jenner. They both attended the Vogue Foundation Gala held as part of Paris Fashion Week on Wednesday at Palais Gelliera in Paris, France. The sisters were joined by the army at the event, the Balmain Army models of course. Kendall and big sis Kim both wore designs by Balmain’s head designer, Olivier Rousteing’s.

Kendall towered over her sister and showed off her model skills in a green, braided like, long sleeve dress. She opted for smokey eyes and a tight sleek pony…Fierce right?? To finish her fierce look, Kendall wore netted black booties with gold detailing.

On the other hand, Kim K wore a cage like blouse and leopard print pencil skirt which certainly showed off her sexy curves. Kim K also opted for smokey eyes, a sleek pony and a darker lip.

on the subject of me 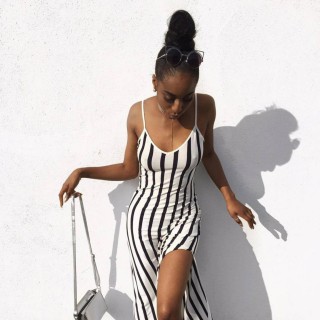 My name is Nina Aigbe and you are welcome to my blog. What I do here ranges from lifestyle to fashion to personal fashion and beauty. I am also a soon to be Biotechnologist and I study outside Dublin. Since you're already here, please do check out my posts and like, comment & share. There is also a follow button for you to follow this blog and also check out my social media sites which a located at the end of the page! xo, Nina